I am inordinately pleased with myself and so I thought I might show off a bit if you don't mind indulging me?

It took one ring that I made too big, then sawed open to make it smaller and soldered it again, one melted bezel setting and one remade bezel setting with two soldered joints and four frustrating attempts to solder the setting to the ring. It's the first stone set ring I have ever made and it's about as far from perfect as it could be but I did it.

I bought the opal about a year ago with the thought of making a ring. It flashes pretty blues and greens in the light. Opal is the birthstone for October; George's month. I can't quite believe it worked so I'm a little wary of wearing it "out" in case it doesn't hold. 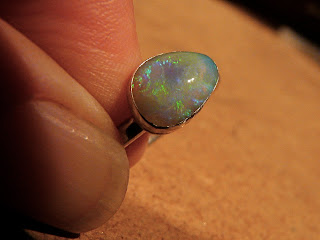 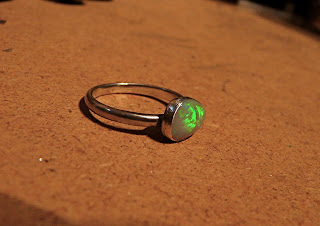 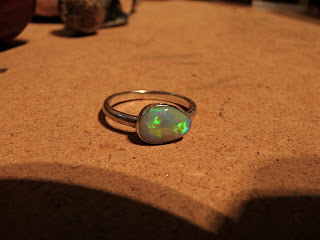 A beautiful sprinkling of snow on Dartmoor.

A hot water bottle, thick socks, a blankie and a nice cup of tea on a chilly day.

Making a ring for myself... (or at least part of it; I have to remake the bit I melted).

Making my Mum happy by telling her that we will be spending Christmas day with her and my Dad.

What good things found you this week?

This week has been less than easy.

We started it worrying about Ray's endoscopy, followed by relief that there was nothing found mixed with disappointment that they didn't find a simple ulcer and zap it (or whatever they do) and then worry again that he needs a colonoscopy because they know that there is something to be found. It can't be serious. It just can't. He's fine. He feels fine.

Our Landlord (also a friend and provider of work for Ray) still hasn't concreted the area outside our back door. It's a rubble path at the moment and the garden is full of scaffolding, sand, a concrete mixer, etc. Ray sent him a hissy text message and then he sent one back. The following day we locked ourselves out of the house and had to call him.

The car failed it's MOT (road worthiness test) and the brake callipers need changing. We need to spend yet more money we don't have.

Life just keeps going on. Losing a baby, two babies, a whole team of babies doesn't exempt you from other crappy stuff. It should. It really really should. By rights all of we the babylost should win the lottery jackpot and suffer perfect health and a peaceful mind until the day we die, hand in hand with our love, in our sleep at 101.

They forgot that didn't they? Yoo hoo, hello? Excuse me? Can I have my babylost free pass to an easy life now please? Hello.....?

And so, we found the brake callipers for half the price we were originally quoted and my Mum is lending us the money until Ray's next job and it's not as much as it would be if Ray couldn't do it himself. When our landlord turned up with the key he cheerfully apologised for all the delays and promised that next week... and as for Ray, well we don't believe it is anything sinister because well, it's not possible.

Things are rarely quite as bad as our imagination tells us.  Of course sometimes things are very very bad, but mostly... hopefully...

And so, life goes on, even with an ache in the chest, a knot in the stomach and an inconvenient hole in the pocket.

The endoscopy was "horrible", even with sedation.

The nurses were lovely.

There was no ulcer or anything to explain his test results.

He feels fine with no ill effects other than some mighty burps.

We are trying not to worry.


Thank you for your good thoughts, you are lovely lovely people.


Sometimes I think the universe has it in for us.

And sometimes I think we are the luckiest people in the world to have found each other.

Could you take a moment to think of us today?

and send a few good vibes our way?

Ray has an endoscopy this afternoon to search for an ulcer.

And that's all we want to find.

Ah ha, I managed my list on a sunday!

New jewellery supplies (it's been a while since I made anything)

My Mum being better

Being enough for each other

Late again, or maybe this has slipped into a Monday thing.


Having to get out of a warm bed on a chilly night to pee and coming back to find a Poppet on my side of the bed keeping it warm for me.

A cheque from the tax man.

Mum being ill again but not having to go into hospital.

Kitteh's falling out again and making up much quicker than last time.


I am honoured to be honoured. 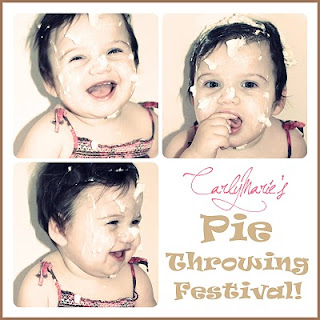 So I would like to throw a pie at our lovely landlord who has been faffing about renovations on our home since springtime. Gaaaah get it finished already!

And I would dearly like to throw a very large pie at the universe for getting things so stupidly horribly wrong for so many lovely people.

Please click the image above to hop on over to Carly's page and join in with the fun.

Autumn colours
Reading in bed in the morning.
Starling hunting at dusk. Not actual hunting of course. Just trying to see this amazing spectacle.
Drinking tea from our flask and watching the sea.
A little bit of hope

There was no conscious decision to give up.

Only the feeling of utter hopelessness after losing the tiny leap of faith that was Little P.

(I have read the comments on that page several times and they never fail to make me cry. You are all so kind.)

One or two people (in the real world) made comments along the lines of, "You'll get there" and "It'll happen" and I would shrug without enthusiasm and mumble a non-committal, "We'll see" whilst thinking, "Oh no we won't".

But the thing is, when I did start to think through the sludge, it turned out that the thought of giving up was so much scarier than the thought of trying again. I mean way scarier. In fact giving up felt wrong. Feels wrong.

It's been about four months since we lost Little P. (I'm trying hard not to keep track of how far along I would be.) and my ladyparts seem to be functioning as best they can. I notice signs of fertility, I feel ovulation twinges and my cycle is regular.


There will be no IVF, no donor eggs, please don't suggest it, we have no money and we will not get into debt. This is one last try with my old scrambled eggs, good food, vitamins, the odd herbal thingy, plenty of water, and whatnot. At least the whatnot is fun. Mostly.

This secrecy idea is partly because we wouldn't tell anyone out here in the real world, especially my parents, for as long as possible. The memory of my Mum's heart breaking when I told her about Little Poppet still haunts me and I won't do that to her (or me) again.


And if it doesn't work... well, that doesn't bear thinking about any more than we have already so we won't go there again for a while.


All I would ask of you is that you muster yourselves, perhaps light a candle or burn something, maybe walk around it three times, do a fertility dance or ritual, utter some sort of incantation and send the biggest most concentrated, clearest heap of conception intentions our way. We need them. Seriously.

*drop me a line and I'll add you to my "in case of pregnancy, inform" list.
20 comments:
Labels: Two Week Wait

Dearest Danielle.
I have been thinking about you and Alan all day.
Thinking about your son Kai on his day.
And missing him with you.
Thinking about how glad I am to know you and how I wished I didn't.
Hoping that you can pick up the frayed threads and make something new and beautiful with them.
Sending great heaps of love your way.
And lights in the darkness. 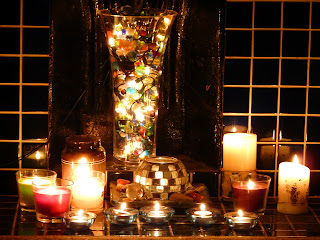 We have moved back into our bedroom from the tiny back bedroom that we squished our kingsized bed into. finally.
Finally I can find my clothes; ah, that's where all my clean knickers have gone.
Finally that awful dirty yellow wallpaper has gone.
Finally, the lime green fireplace is white. We have our bed against it but really, lime green fireplace?
Finally the wardrobe is out of the kitchen.
Colours: Blue, chocolate brown and white, with a bit of cream thrown in for good measure. 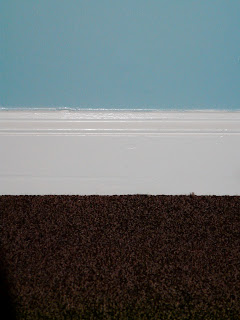 Ray's side, untidy to start with... he he.. well that's unfair since I am FAR more untidy than he is. He just hadn't put his clothes away before I took the photo. 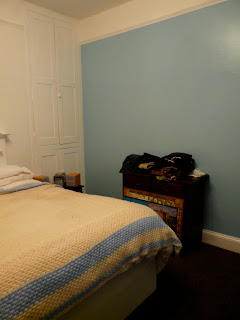 Ray bought this wiggly light for me as a gift when he first moved into my old flat over 3 years ago. It never went up but became a table lamp. Finally it's in it's rightful place (next to the stupid smoke alarm). The "arms" can be bent and wiggled around, it is very cool. 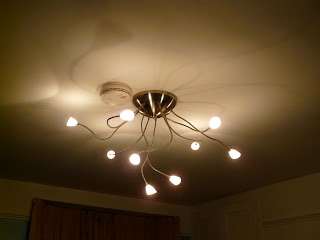 My side of the bed (the curtains really aren't quite as dark goldy-yellowy as they photograph) An Itteh bitteh happeh kitteh waiting to jump on the bed and snuggle on the blanket my Mum knitted for me and extended for us to big bed proportions by adding the blue and cream bands to the outside. The cats have been quite put out by all the building work and moving shenanigans but seem happy to have "their" bed back. 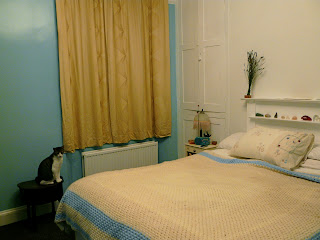 We haven't put the pictures back up yet because I'm enjoying smiling at the walls too much. I'm planning on painting a wall-blue tree silhouette on the white wall behind the bed but we ran out of paint so it will have to wait. BUT it's a much more peaceful and happy room now. (I have some sage from the garden drying to do the smudgy thing). 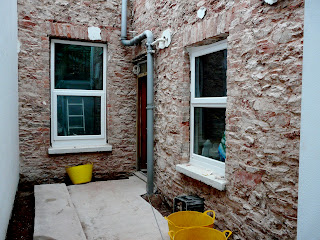 And now there is this: 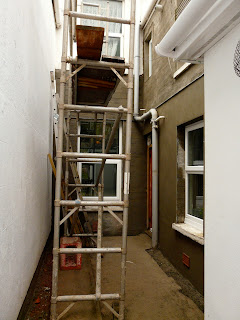 With half of one wall finished. 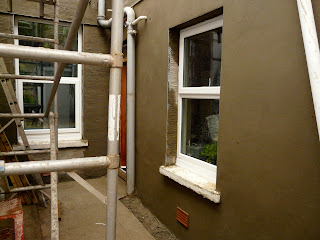 At 7am, just before the two workmen arrive, I get up and grab kittehs, kitteh food, flask of hot water, jug of milk, tea cups and tea bags and we shut ourselves in the bedroom while the two workmen scrape and tap outside our window. Fun fun fun. Weather permitting it should be finished in the next few days. And then when it's dry Ray gets to paint it.

And then our landlord and Ray will re-do the concrete path to the garden.

And then, finally, we will have our house to ourselves again.

Until they start on the hallway ceiling next year. (Not this year because our landlord is going off to India for three months. Nice for some eh?).

Going to sit in the bedroom now and smile at the walls.