Before us in the supermarket queue were an older couple stocking up on booze for Christmas. They spent over £100 on wine and spirits. Our chatty cheery checkout lady then chatted to us about writing her christmas cards with half a bottle of red wine while her baby was asleep upstairs. Had we done all our christmas shopping? Last year she gave birth prematurely the day before christmas and so they didn't get to celebrate it properly.

It's good job we still have a bit of empathy hanging around and a modicum of self control because we could have easily ruined her cheery mood.

No we don't drink because Ray's father was an alcoholic and Ray hasn't had a drink for many years and he doesn't really see the lighter side of it.* No we didn't celebrate Christmas last year either but that was because our baby died and to be honest we're not that bothered about celebrating it this year because our baby isn't here...

And yes of course, it did run through my mind that I don't know her story. She might have been a member of the "club" once or many times and of course I know of the worry and the long road through prematurity through my friends in this place. But still. You know.

On the way home a couple were trying to cross quite a dangerously busy road on a bend only a few metres away from the safe crossing with traffic lights by pushing their baby in it's pram ahead of them into the road and I almost opened the window and screamed at them for their stupidity. Don't you know how lucky you are!?

I think perhaps I shouldn't go out. It's not doing my stress-free attempt at calm baby-making zen-ness any good at all.

And has my mum started with the I'm-not-going-to-ask-you-what-you're-doing-for-christmas-lunch guilt trip yet? Of course not, the very idea, as if. I haven't told her yet that we are inviting ourselves over...

*I get no kick from champagne. Mere alcohol doesn't thrill me at all..."
I do like a glass of ba'il.eys, or oooooh a bai.l'ey.s latte... or maybe a nice single malt whiskey, but very rarely. Alcohol was one thing I didn't need to give up when I was pregnant.
12 comments:
Labels: christmas shmismas

My friend Susi died in her 80's after a long and well lived life. I went to her funeral this morning with my Mum. I count myself lucky to have known her smile for the short ten or so years that I did. I didn't see much of her this grieving year of mine and that I regret. I will miss her.

You might know that I have no religious beliefs, but my friend Susi did. So I went along with her many friends and large family to say goodbye at her church. I found myself shedding a tear for Susi's granddaughters who wrote a poem to their Oma* and cried through it's reading and the shy one who sang a song, and after, hugging her twin sister Hanna. But not for that long life filled with love and well lived. This is how it should be; the correct order of things: the old die and the young grieve. At the end the vicar said something that struck a chord in my battered heart.

She said that you should never try to fill the hole left by someone who has died. You should leave that space inside you just for them. Trying to fill that void will make grieving harder.

And don't we know it; grieving is hard enough as it is.

I have always maintained that I won't follow any grieving schedule. Those who think I should be "over it by now" are simply wrong. My journey is mine. If in a month or five, ten, fifteen years time I find myself stepping into that gloomy place again I know there is light on the other side and avoiding it will only make it loom larger and darker another day. I have to feel what needs to be felt.

There is a George shaped hole. The edges aren't so sharp after a year but the hole is still there and always will be.

I miss my boy.

And I'm stepping back into the light.

*Grandmother in German. Susi and Hanna escaped from East Germany after ww2 and eventually found themselves in England, Susi married a Polish man and had three sons and many grandchildren. Susi was variously a bookkeeper, a masseuse and beauty therapist, an administrator, stay at home mother and a home wine-maker. She took to computers in her 70's and often called on me to help solve a pc problem or go swimming with her. She always had a smile and a giggle.
16 comments:
Labels: the worst thing in the world 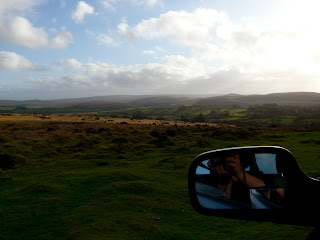 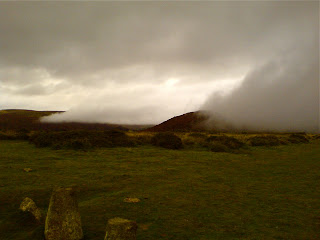 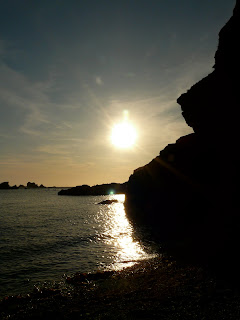 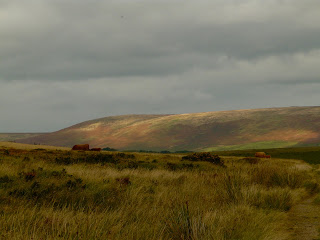 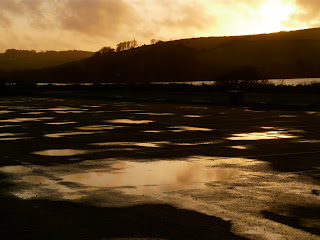 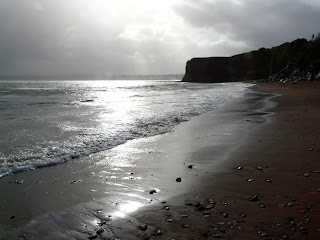 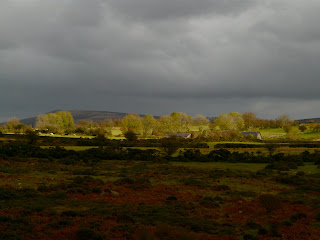 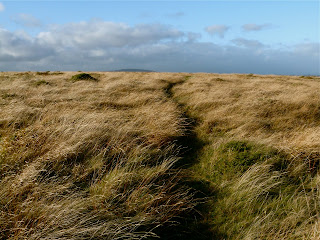 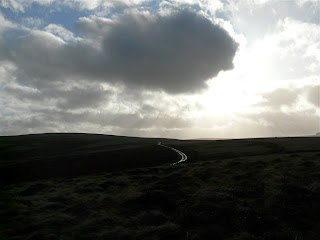 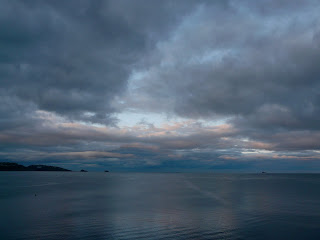 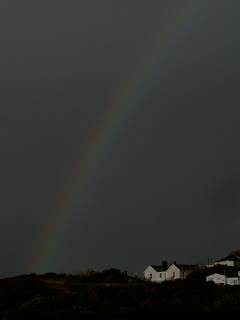 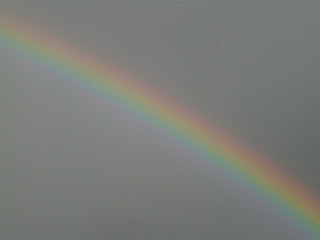 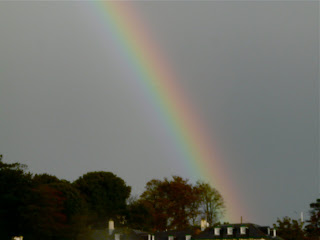 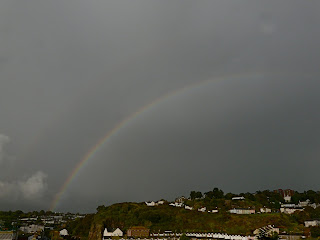 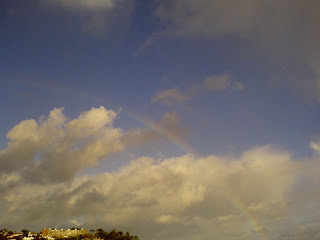 And trying to find the end of the rainbow.

We went christmas shopping today and managed to do most of it in one shop using their buy 2 get 1 free offer three times. It was Ray's idea to go shopping. *gasp*. I know, it made me *gasp* too.

We managed about 5 shops and one St,a,rb u.cks before we needed to escape. The coffee came before the shopping and yeees I'm still doing decaf. I'm also doing sleeping pills, but only when I have my period. I thought I might be pregnant this month, spotting on 11/12dpo and then nothing, period a day late: but it's here now so I'm not. Pffft. For one day I was almost convinced and bloody hell how my mind flew off into all sorts of directions. I'd like a co-sleeper cot, the cvs test was incredibly painful, I'll be pregnant in July, I hope it's not too hot, I'll get a baby sling, we'll find out the sex this time... and so on. Again. Pfffftt.

I dragged Ray into the @p.p.le store and drooled for a few minutes over the ma, c b.o0k p,r0 I'm planning on upgrading to at some point this century before remembering that I desperately needed the toilet and that I would rather be spending money-we-don't-have on a baby.

There were far too many babies being hauled around shops they were dressed far too warmly for. We should be preparing for 10 month old George's first Christmas.

We spent our first Christmas together alone with our landlord who came out Christmas afternoon to fix our burned out fuse box. Dinner was half cooked and then finished a few hours later. It was great.

We spent our second Christmas together mourning our son and listening to the friend we had invited round to take our minds off being alone talking about his sad life. It wasn't great.

This Christmas we will probably eat with my parents because quite honestly I don't know how many more Christmases there will be where my Dad remembers who we are. And my Mum is a better cook than both of us put together.

Next Christmas, despite the fact that I have no religious beliefs any more (not for many many years) I want to celebrate with my husband* and our baby**. Dammit.

The fairy lights I put up around our fireplace last year are still there. Last year I said I was going to leave them up for a new baby.*** Maybe I should dust the fireplace and rearrange them.

It's not even December yet but really, Bah humbug!

*no we're not married yet, despite the fact that Ray refers to me as his "missis", but we will be. Eventually.

**for goodness sake is it really too much to ask?

*** I know I said I'd be back with some light, do fairy lights count?
13 comments:
Labels: christmas shmismas, the worst thing in the world

Sometime around dark o'clock this morning I woke up. Snap. Wide awake. I awoke crying. I've no idea if I had a sad dream or it was triggered by those oh-so-unwanted premenstrual cramps.

I tried to keep it down but still managed to wake Ray who wrapped himself around me and kissed my neck.

"I miss our son and I want to be pregnant."

Yup, that's just about it.

I haven't had much to say lately (bloggers block?) but what more can I say at the moment when those ten words sum up everything in one dark little nutshell.

Notes to self:
Mustn't wipe nose on duvet.
Must find other thoughts to think.
Must cheer up.

20 comments:
Labels: the worst thing in the world

If you haven't already, please go and congratulate our lovely Sally on the safe arrival of Hope Angel's little brother.

Welcome to the world Angus.

There's been so much love waiting for you.

With words, with days, with hope, with just about everything at the moment.

This year has been difficult to say the least. Frightening, painful, dark, enriching, strange, enlightening, filled with love and so so terribly terribly sad.

Coming full circle hasn't changed anything. George is still gone, I still miss the him that I imagine and I'm still not pregnant again. One day passing into another didn't make everything magically "better" and I didn't expect it to. I'm still plodding on, sometimes in one spot, sometimes taking a little leap and sometimes stepping back.

And that's what I seem to be doing right now; stepping back. I have half written posts, half written emails (sorry), half finished pieces of jewellery (don't worry if you're waiting, I'm getting there) and even now, half hung out laundry. All of which in my mind seems to sort of mirror my half finished pregnancy.

I'm sorry I haven't been commenting very much lately but I know you understand. You really are great. I do mean that, you are great. I am reading. I am cheering you on from the sidelines. I just don't have many words.

32 comments:
Labels: the worst thing in the world

Danielle I am with you today and every day.

Uuhm... ok you'll have to imagine the fanfare.

I wish I could just make you all a tag or a page! So, until we win the lottery...

I wrote two lists, one for the tag and one for the page. I gave each entry a number and then used random.org to randomly select a random number from each random list, and...

Calvin's mama Margaret of She's come undone, with her beautiful son's name written on it.
And a tiny tag will zoom off to....

Akul's Mama at Aaja Akul, in memory of her beautiful son.

I'm sure I'll be doing another giveaway in time for Christmas so do try again! Or if you can't wait, don't forget there's a 20% discount for blog readers! (Oh I know I said it was until the 31st October but you know...) Just drop me a line with "20% off" as the subject.

Oh lordy what a day!

We have not long arrived home after what should have been a pleasant drive over Dartmoor to watch the sunset and relax.

We were driving home when the car started a-knocking and a-banging and a-violently-vibrating. We pulled into a tiny car park in the middle of the windswept wild moors and called last years christmas present from my parents; a membership of the Automobile Association. Hooray for over protective mothers!

After an hour or so he found us.

One of the wheel nuts had sheared off.

He patched us up.

Patched us up again.

Car=money. We need a new wheel and new wheel nuts.

Huge apologies for not drawing names from random hats tonight but a shower and a cup of tea are all I can manage.