On Christmas day, before a lovely lunch with my parents and brother, we went in search of adventure
(and non-icy roads).

We found a little bit of peaceful. 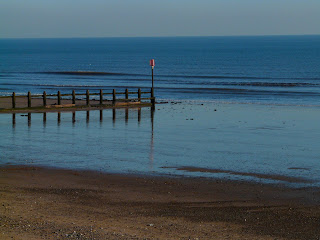 A little bit of snow on the beach. 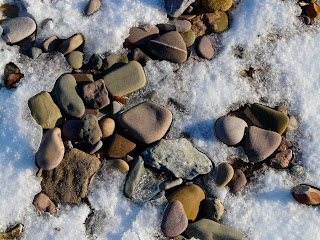 And a little palm tree in the snow. 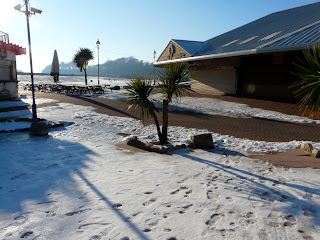 Ray had fun making handbrake turns on the ice and sliding around the car park. I didn't close my eyes and hang on for dear life, no of course not. I loved every second of sliding uncontrollably around a frozen car park so I did.

:::
On Boxing day, before braving the family party, we went in search of snow and solitude.
We found the snow but unfortunately so did every one else so there was very little solitude.
We found beauty however.
Dartmoor ponies in the snow. 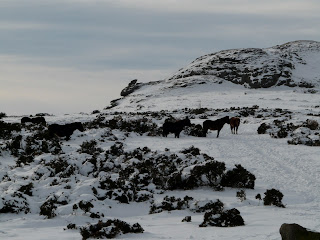 Blue sky for a blue Christmas. 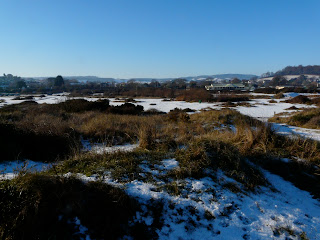 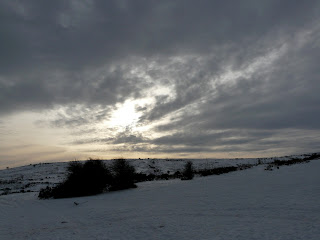 The family thing was good...
ie I didn't run screaming from the room at the sight of a pregnant woman.

Our kittehs are stuffed with turkey, beef and bacon leftovers. They quite like Christmas.
(I had nut roast and veggie sausages; they weren't interested in my leftovers)
We I provide lots of soft cosy woolly things for our cats to sleep on under the radiator but of course they prefer a plastic bag containing a back massage cushion or dangling off a hard shelf to anything a human could come up with... 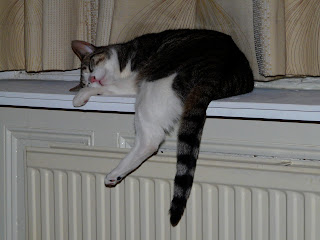 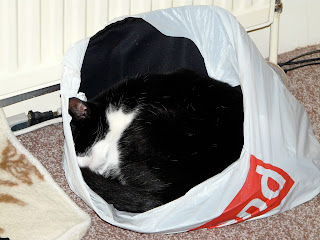 Yeah, Ray loves being in a photo just as much as me. That's a smile not a grimace.
Oh but it was cooold. 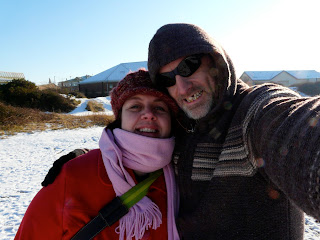 I mean, oh great... no... I mean, how wonderful, can't wait to congratulate them.

Ray's two sisters both have children but none of his three younger brothers do... did. He was going to be the first of the "male side of the family" to have children. Now it will be the next youngest brother. 4 months. They didn't tell us, they were worried about telling us. I'm worrying about seeing them on Boxing day at his Mum's.

You can't turn on the radio to listen to the snow/traffic reports without hearing something "festive" blaring at you. If I hear "fairytale of new york" one more time because it's "alternative" I might just explode.

As you might guess, I am not a great fan of Christmas music, in fact I'm not much of a fan of Christmas at all, not being religious and all that, and goodness I really don't enjoy worshipping at the altar of consumerism. Being buffeted along the street by panic shoppers when all you need is some bread is just so not fun.

After losing George I was even less interested in the whole thing, and as this year I was meant to be heavy with child, well, it's all even more of a bah humbug sort of thing.

But then this song came on the radio the other morning and it made me feel a little... umm... twinkly... so I thought that I must share it with you.

Listen to the second song, "Carol of the bells" you might like the others but this version of that song is something quite special. I think. I might even turn on the fairy lights.

Opening the curtains in the living room, seeing a snow covered world outside and getting just a hint of the excitement I used to feel as a child, Oooooh pretty snow. Right before thinking, brrr, not going out in that.

Deciding that we were "snowed in" and not going out shopping.

Mum saving be a big blob of marzipan from her Christmas cake.

Dad telling us that he'd played "better" at snooker. (He is taken out by a volunteer once a week and they usually go to a snooker club for a game and a beer. My Dad used to be captain of his local team many years ago and had a cupboard full of trophies. He thought he'd forgotten how to play).

Standing in the garden watching the birds eating the seed I had just put out.

Oh this is yummy. 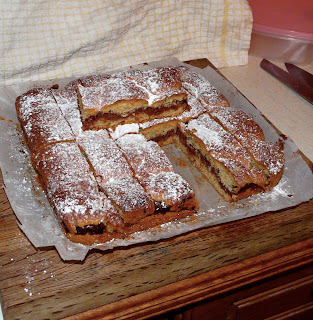 
2 1/2 cups of grated apples
1 tablespoon of dark brown sugar
½ teaspoon of mixed spice
1 teaspoon of cinnamon (I used 2 and Ray thinks it's a bit much but I rather like cinnamon!)

1 tablespoon of flour (I forgot this, duh, but I don't think it's made much difference).
It's not in the original recipe (which I adapted to make one not-so-enormous cake when I realised I only had half the apples needed) but I heated the apple mix with a blob of butter to get a nice thick syrupy mess but you know, whatever. Let it cool it a bit if you do. 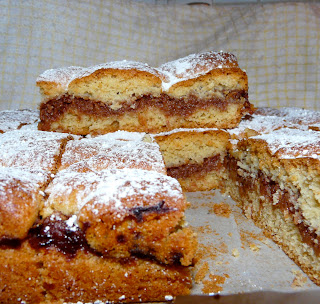 Incorporate Beat the living daylights out of:


115g/half a cup of butter
¾ cup sugar (I mixed dark brown, caster and granulated just to see what would happen, I'll probably just use caster sugar next time)
a drop or two of vanilla essence

Then smoosh in, a bit at a time,

Add that to the egg mixture and mix well.

Butter your cake tin or line it with baking paper. Oops, on second thoughts better do this first along with heating the oven to 180•C or 350•F

Use a bit more than half of the cake mixture to line the bottom of the cake tin and then spread the apple mixture on top. Then put dollops of the remaining cake mix on top of the apple leaving gaps between dollops, mine wasn't quite gappy enough to let the apple mix show through because I didn't put enough mixture on the base... but hopefully you get the idea.

Place in the oven and cook for around 25 to 35 minutes or until a knife stabbed into it's heart the middle comes out clean.

Share bowl scrapings with kittehs and then wash the bowls and clean kitchen so it no longer looks as if it has been the scene of a minor skirmish.

Sprinkle the cake with icing sugar or make up some sort of glaze to dribble over it.

Patiently explain to your Poppet why apple pie cake isn't the same as "soggy old apple pie" and yes, he WILL like it. Dammit.

Enjoy with a nice cup of tea. 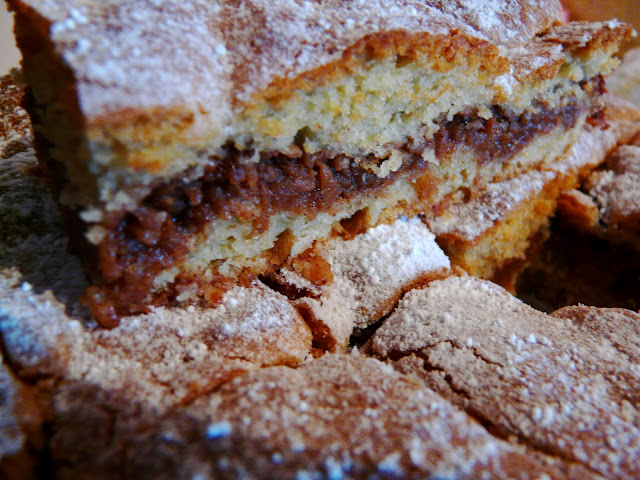 Little Poppet was due at the end of January. I should have a big round belly today and I can't even imagine what that would be like; I have a flabby empty belly instead.

I try not to do this to myself too often. I try not to calculate and measure the time we have lost and wonder too much but I've just put out some fairly lights with a heavy heart and very little enthusiasm.

And while Ray has popped out I sit here with a cup of tea, two kittehs draped on my lap and tears in my eyes for what might have been... for who might have been. Our 2nd Christmas without George and our 1st without the hope that Little Poppet brought and I wish... I'm so tired of wishing things were different.

We're going to eat Christmas lunch with my parents and my brother again this year because it pleases my Mum who exhausts herself making things nice and I can't help but feel as if I have deprived her and my Dad of the joys of even more exhausting grandchildren. She has a hard time with my Dad some days and what a difference it would make for her to have a tiny tot to spoil.

Fortunately, these sad thoughts don't hang around quite as long as they used to but when they bite, they tend to hold on a chew for a while.

9 comments:
Labels: christmas shmismas, the worst thing in the world

A brand new magnifying work lamp ordered, from Mum and Dad to me for Christmas (and delivered the next day).

Finally... finally, some concrete going down outside our back door. Half done Friday, the rest on Monday. No more twisted ankles on the rubble.

A morning coffee with my Mum after a little shopping.

The satisfaction of two jewellery orders finished and posted.

I was explaining the stone in my ring to my Mum,

"No it's not my birthstone, mine is ruby. It's October ... George's birthstone".

And there it was. That little pause before I say his name; a small intake of breath; a catch in my voice.

I wonder if it will always be there.

7 comments:
Labels: the worst thing in the world

Being up on the moors, Ray driving narrow lanes in the snow, in a traffic jam of 2 cars and a herd of 14 cows.

Chips with salt and vinegar, wrapped in paper and eaten by the sea on a blustery day.

Deciding that I need to think differently about pregnancy and babies and almost getting there (work in progress).

Finding the "perfect" small Christmas tree for my Mum and Dad .

More sex: there are good things about trying again you know. *blush*


What good things found you this week?