I can hardly believe that it's been 4 whole years since I looked at my tiny little boy, kissed his nose and said "I'm sorry".

Today we are going on an adventure as we have done for the last 2 years.

Only this time it will be different.

We DO have the baby in the back seat.

We DO have the tons of accoutrements that follow us around these days. This year we DO have the sleepless nights, the worry, the joy and the love.

Oh so much love.

But just for one.

Where there should be three.

You have not been forgotten nor replaced. How could one person replace another? Impossible.

You are you, the only you there ever was or could ever be and you are missed for all that you might have been.

For the role of big brother that you should be playing now. For the joy we should be anticipating at seeing you grow into a big boy, a teenager, a young man, an adult.

I think of you every day. Watching Felix develop and grow makes it even more obvious just how much we have lost. A whole world.

For every kiss I give your brother there is one looking for you.

Our beautiful boy is 4 months old, oh my. Can you believe it! 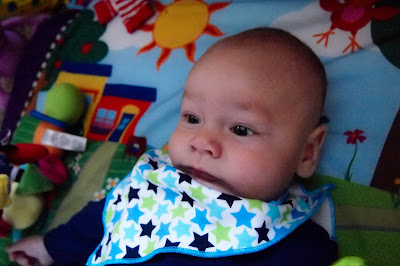 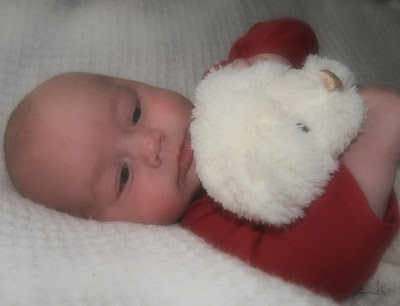 Felix is full of smiles these days and it catches my heart every time he looks at me and smiles spontaneously.

Yesterday he laughed properly for the first time and both Ray and I went a bit gooey and weepy!

He still loves his baths and is almost too big for his little tub! He can empty a couple of inches from it with all his kicking. I have been using ideas from this online swimming class and he now closes his eyes and takes a breath when we say, "Felix, ready, go!" and pour water over his head and face. He doesn't mind in the slightest.

He is generally a mellow baby and will happily play by himself on his mat or in his bouncy chair for almost an hour without caring who is or isn't with him, as long as his toys are smiling at him and there is something to grab and pull to his mouth. But of course he loves it too when we play along, and we love it too. Until we flip him to his tummy... 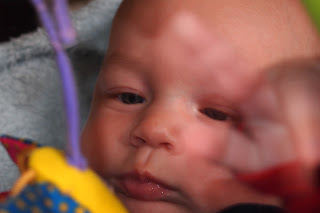 He hates being on his tummy and manages between 5 and 10 minutes before starting to complain. We keep trying though.  He can lift his head easily but also tends to lift his arms back and up too not taking his weight on them very often. Any ideas? 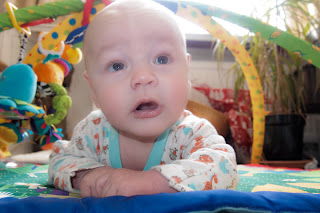 I have found that, despite being a big baby, being 3 1/2 weeks "early" many of those "milestones" you read about and are emailed about are coming a couple of weeks "later" and are therefore, going by gestation, probably "early" and by my own dating, even earlier!  So we stopped reading and just concentrated on playing! 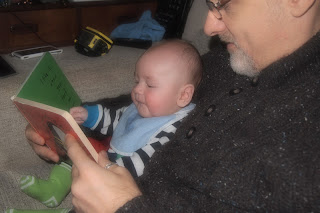 He has a slight tendency to turn his head to the left. He can and does turn to the right quite easily and there's no flat spot on his head but it does concern me a little and I'll be bringing it up again at Felix's next jabfest. We've been doing some exercises and when he's on his play mat we place his toys on his right side. We also turn his head while he is sleeping during the day. At night we leave him to be comfortable where he wants!

Not that anyone is interested but in the spirit of docuemtation: Things we have found essential in the last 4 months!


Muslin cloths. We have about 25 (bought second hand from fleabay) and there are never enough! Burp cloths, bibs, changing mats, comforters, spill wipers (damn I am clumsy!) and in a crisis an emergency nappy. He twiddles one in front of his face as he's falling asleep and often prefers this to his dummy. 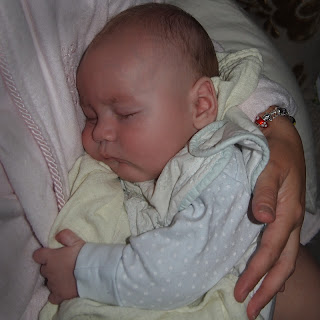 Super-large muslin cloths. We have 4 which were his swaddles and are now sunshades, blankets, pillows, burp cloths and comforters. We always have one with us.


Can you believe he was this tiny?! 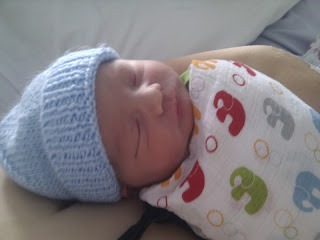 Tippeetoes mini-bath. Brilliant little bath with a moulded seat. We used this from the beginning and as baby is positioned you don't worry so much about slippy babies sliding around and off your hands. From 4 weeks old or so he reclined in it with a hand nearby but not on him. Can't recommend this enough! (Read the reviews on amazon if you don't believe me!)

Dungarees. Preferably soft ones with a vest underneath. I've never liked trousers on tiny ones and tops just seem to constantly ride up. Dungarees generally have adjustable straps which gives more room around the crotch area for cloth bums and the stretchy ones seem more comfortable. 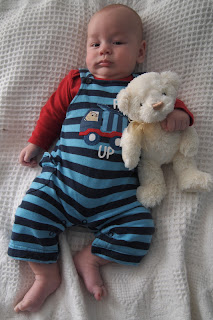 Fleabay. Seriously. His enormopram, many toys and nearly early all of Felix's clothes are second or third hand and there are some great bargains out there. I also sell on his clothes as he grows out of them (quickly!) Most of our cloth nappies have come from there too.

Car boot sales. We've bought toys, his bumbo seat, books and bits and bobs. Great for the heavier things that you wouldn't want posted (not including enormopram of course - I wish I'd taken a photo of the enormobox it arrived in!).

For us, the Yoomi bottles have been great. When I finally had to give up on breastfeeding and sold the small Breastflow bottles (brilliant as they mimic the suck/compression of breastfeeding) I wanted something special and they are made in the UK. Yoomi bottles come with a warming pod which works in a similar way to a pocket hand warmer) that sits inside the bottle and warms the milk gently in 60 seconds. Perfect for our days out and adventures when we are no where near a heat source!

Toys with big clear smiley faces. He grins and shrieks at them and I even drew a smiley face on a carrier bag hanging next to his changing table. 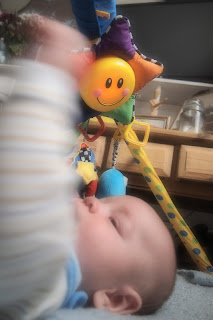 And our family of smiley faces too of course - absolutely essential! 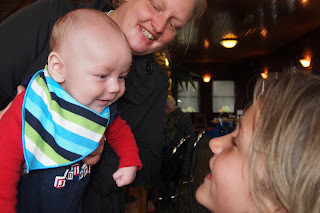 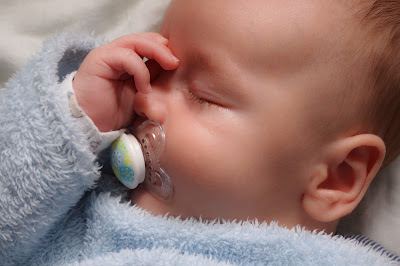 In which I have a minor breakdown.

I am reading blogs this morning with Felix sleeping on my chest. He's getting heavy, my breathing is becoming laboured but I don't want to move him because I love the living breathing humming grunting weight of him. I look at his face and see his brother and there's that familiar pain. Duller, yes, but still there.

I haven't written on my blog for a few weeks and you will see a HappyFelix post next week when he is 4 months old (I know!).

But I want to write about George and I have no reference point. I have no words to describe this new feeling. This holding-a-living-baby-after-so-much-pain-and-longing feeling. This missing-the-son-that-isn't-here-whilst-rejoicing-in-the-one-that-is feeling. I'm struggling with that.

I am happy, overjoyed, in awe, amazed. I look at him and laugh. He's real. He's really really real and he's mine! But then that old familiar dreary friend gives me a nudge. The friend I thought I had left behind somewhere between the hospital and home. Depression? Don't be silly: look at my life! I have a perfect little person becoming himself in front of my eyes. And yet.

I switch into practical mode. I'm not depressed (I hate that label) I'm tired and run down. I can tell that my iron levels are low because I felt like this the last time I was anaemic (before I became pregnant with George) so I'm taking my iron again. It was nice for a while, not taking my vitamins, not caring too much about what I ate, because I was only eating for me and not for his health too. But in the end it IS for his health too even if we're not physically connected and I can't breast feed (still breaks my heart). It's gone on too long. I've gained more weight, my bones ache, my feet hurt, my muscles scream at me and I need to get a grip.

I had a bit of a meltdown on Sunday, threw some toys from my own pram, cried as I haven't cried in a long time and got sent to bed at 9.30. And I slept. Oh how I slept. Glorious wonderful sleep. I woke at 6am listening for breathing sounds and shot out of bed when I heard none. Ah but there were no breathing bodies to check. Bless all that is Ray for staying up all night with Felix sleeping restlessly in the living room to give me some peace. Poor chap, I think I frightened him with my freak out. I'm normally the calmer one.

I sent him to bed, finished feeding our son, who went immediately into a deep 3 hour sleep, and took a handful of vitamins.

Life is good. Even when it isn't.