I had a little pink spotting last night and a flood of emotion swept me away to my pregnancy with George.

I have been trying so hard not to compare and contrast. Not to let the fear creep up on me too much. And failing miserably!

The spotting turned pale brown and stopped this morning and then came back and stopped again.

I know it's common and it's not the same as the bleeding I had before but I can't help but think, every time a little twinge feels the same, ooh is this it? Is that what caused it? Is it going to be the same?

I cried a bucket load of tears last night and Ray held my hand tightly.

Questions with no answers.

I am much calmer now. Still obsessively knicker checking. "Do you need to pee or are you going to check?"

While researching with professor and doctor Google about clo.mid with a view to trying it next month or the month after I kept coming across articles and forum posts about "nature's clo.mid" or soy isoflavones and how wonderful they were and how many positive pregnancy tests....... hmmmm.

Soy isoflavones are purported to do a very similar job to clo.mid so I thought as this month is obviously going to be a bust too, especially with all the stress I've been buried under, I would experiment on myself and see if they messed up my cycle completely.

Feeling as if I was tempting fate I bought a menopause multi-vitamin which came with with a separate herbal supplement of soy isoflavones which was on special offer at a local pharmacy (I'm nothing if not cheap). I took out 5 pills and then carefully put the menopause vitamins away for a very rainy day.

I took 120mg of isoflavones (100mg from the herbal and 20mg from the multivit) on cd4-8 and I ovulated early, day 11 I believe, with lots of sharp, crampy ovulation pain. I couldn't possibly say if this is what helped us get pregnant but I thought I'd put it out there in case anyone might be interested.

Thank you SO much for all the comments and messages on my announcement. It means the world to me to have your support and lovely good wishes.

We have such a long way to go. At 42 there are so many risks and pitfalls to get past. I'm trying to take it one day at a time but I'd quite like to wake up at 21 weeks and be bored silly until the birth.

I am nauseous which is good news.

My boobs are really sore which is good news.

Every time I feel a little... um... damp... I'm rushing to the toilet to check for blood. Which isn't good at all.

There's no blood at all which is super good fantastic news.

Hopefully the restlessness and anxious knicker checking symptoms will dissipate.

January is a looooooooooong way away.

Dr Compassion is contacting the consultant ob/gyn to get an appointment for me sooooooon.

I have a midwife appointment on Tuesday (in the UK the first appointment with a midwife is usually at around 8 weeks, I'll be 5w3d I think)

This is our last chance.

I'm so very glad you're all out there.

1 year, 10 months and 27 days after the test that told us that George was made, one ovulation peestick in desperation because I only had one hpt, one internet cheapie hpt this morning, one digital test this afternoon and a whole heap of stress and tears and...
I have to whisper because I can hardly believe it...
I'm pregnant.
Vibes urgently needed please: sticky, happy, healthy, longevity, full term, live baby, calm... yes definitely need loads of calm vibes... whatever vibes you have to spare I'll take them.

I believe this is going to be a bumpy ride.

After the stress of the last few weeks we thought it was high time for a new adventure.
A search for some wonder.
I haven't walked far for quite a while but my feet were having a good day so we decided to go to Wistman's wood.
A long but fairly flat path stretched out before us. Good, no climbing! 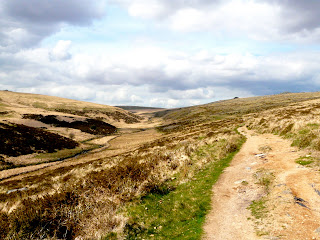 We could see our goal clinging to the right side of this beautiful valley. 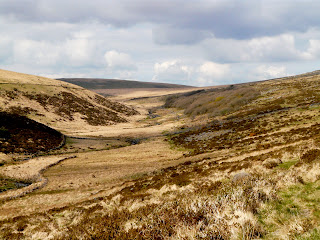 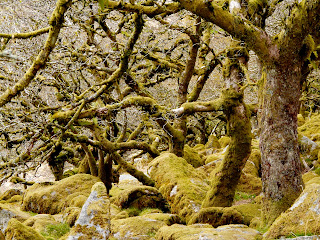 Made safe from the nibbling teeth of moorland sheep, cows and ponies by the boulders, these woods have survived and regenerated the centuries of a cooling then warming climate, the human habitation that cut trees for fuel, farmed it and grazed animals on it and turned it into the beautiful moorland we see today. 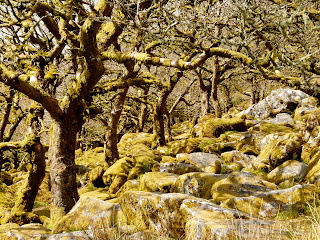 It's a peculiar, almost alien place. 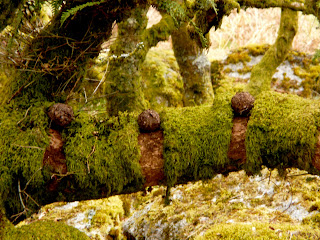 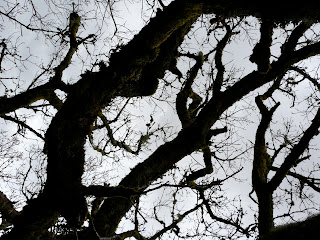 But goodness, you see the strangest things in an enchanted wood. 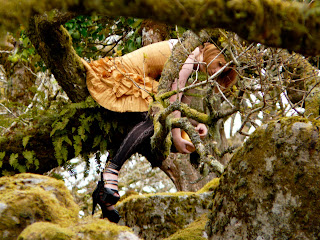 Back along the path basement cat watched us leave. 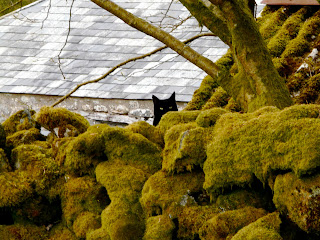 Spring comes late to Dartmoor.
It is only just starting to unfurl. 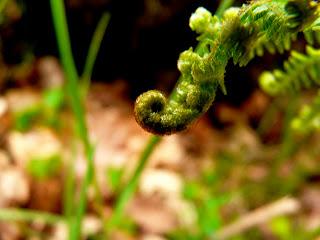 Maybe a two mile walk wasn't such a good idea for my feet but it was worth it.


We just have to go back again when the trees are in leaf.
I found a little peace in that wild place.
I'm hoping I brought a bit of it home with me too.

Lying in bed this morning with a cat snoring near my shoulder and another curled up at my side and my Poppet snoring not so gently next to me I had a sleepy vision of a little boy in blue pyjamas-with-feet climbing up on the stool Ray made me because our new bed is so high to get in on the morning snuggles. That was the word I heard this little boy saying. "Snuggles" as he launched himself at the bed.

And I felt utterly bereft.

I think internet should be on prescription for the lost and bereaved. I can't imagine how I would have got through the last 17 months without the support and gentle advice of this community. Thank you SO much for your words of support and encouragement.

I took a little pill this morning.

I'm not expecting a miracle cure by this afternoon. The only possible "cure" would be for me to wake up tomorrow morning to the sounds of my 14 month old son. For now all I'm hoping for is that the little pill doesn't make me feel sick.

No I'm not defeated and I haven't given up.

11 comments:
Labels: health, the worst thing in the world

Ray and I have spoken to more customer support people than we care to and as of right now the internet has been connected for a whole hour!

It's been like losing my Encyclopaedic library and my magazine collection and most importantly, you, my sweet support system. Of course I can live without my intenets but I really don't want to have to.

My Mum is on the mend but apparently whooping cough/pertussis can take 6 weeks to cease and desist.

My Dad stayed at a respite retirement/care home for a week while my Mum was ill which was weird and a scary portent of possible things to come.

My brother came to stay with my Mum for a week which was a great relief for me (and her).

I have a lot of catching up to do. I've missed you.

It's in my family. My Dad lives with it and members of his family live with it. I have brushed against it in the past and became thoroughly entangled in it after the loss of our beautiful little George.

I wrote, "I have depr.ession" at the top and it doesn't sound right. You might hear about my "bad days" occasionally but I rarely write about the "d" word as I don't like labels. I'm not embarrassed by it but it's not the whole story. It is not my definition. At the moment it's a big part of me but in a few months (or tomorrow) it will be a small part of me. It is what it is.

For me, I believe that it's a natural reaction to losing George. For me, I don't believe it is forever. I believe I am recovering. Slowly. Perhaps that makes me lucky. Some people cope and some don't and some really don't. Some people recover quicker than others, some never recover fully and most of us are changed forever. It is what it is.

It's like counting the days since George died (563). He wasn't any more absent from yesterday than he will be absent from tomorrow but today his absence is almost palpable. George's whole life has gone. I am sad. It is what it is. When it is. How it is.

I'm not sure I am explaining it very well.

Sometimes the world is bleak.

Sometimes I feel closed shut like a rusty hinge.

Sometimes it is an achievement to get out of bed.

Sometimes I am overwhelmed by the enormity of making a cup of tea.

Sometimes I have to search so very hard for beauty.

Sometimes I find it in abundance (quite often right here).

Some times are joyous.

Sometimes I am filled with hope.

Sometimes I am full of creative energy.

Those are great times.

I'd like more of those times please (oh universe).


Today, finally, it was recognised.

Not by Doctor Compassion; he knows.

But by the State.

I attended a trib.unal today to decide whether I am actually entitled to the ben.efit I receive. To award me points for sadness.

It was in a county court room *gulp* and terrifying.

One doctor and one lawyer and one clerk and one crying mother with no son.

Outcome: Yes, you are entitled.
In other words:  That old codger who assessed you in October had his head stuck up his... umm... assessment.

I'm not sure this is a win or a victory but it certainly takes away some of the stress as we have been living with this uncertainty since October.

One foot in front of the other, sidestep, step back, leap forward (all with a bit of a limp).

My Mum was in hospital for 5 days with nasty asthma, home for a couple of weeks and then whooping up a coughing storm for the last week and a half.

She is my Dad's carer and so my Dad has been in a respite care home being pampered by the lovely care staff/nurses.

She tearfully misses him holding her hand. For 50 odd years they have only been apart for babies, fibroids and gallstones.

I miss things the way they were before Altzheimers elbowed it's way in.

My brother arrived yesterday and so I stopped worrying about my Mum being on her own and feeling guilty for not wanting to sleep on her floor.

My brother took my Dad for a pint of beer yesterday and is taking him to watch a football match in a pub tonight. My Dad is doing quite well out of this. And as Ray has noticed, being in an unfamiliar place has forced him to use his brain without having my Mum to fill in the gaps.